The Val Gardena is one of the most popular skiing destinations in northern Italy. The stunning scenery of the Dolomites combined with relatively easy access from the main north-south motorway has meant that all three of the ski resorts in the valley are on the shortlist of anyone wanting a real Italian ski holiday.

Ortisei is the main settlement in the valley, Selva is the best known ski resort, and Santa Cristina links the two together from the middle.

The Val Gardena also provides ski connections up and down the valley as well as onto the popular Sella Ronda circuit around the Sella massif, whereas some of the other Dolomites resorts are reliant on bus connections to keep the links going.

The valley has a length of around 20km and was originally a forested area used by hunters and farmers and, like most mountain areas, its natural resources were controlled by the local nobility.

The first skiing in the valley started in the 19th century and the first ski race was held in 1908 from the Passo Gardena down to an area above Selva. The first cable car however was built in Ortisei, followed a few years later by ones in Santa Cristina and Selva.

The communities of the valley put a tremendous amount of work into organising ski races to put their resorts on the map and their efforts were rewarded not only with local champion ski racers but also with the staging of the 1970 World Championships. 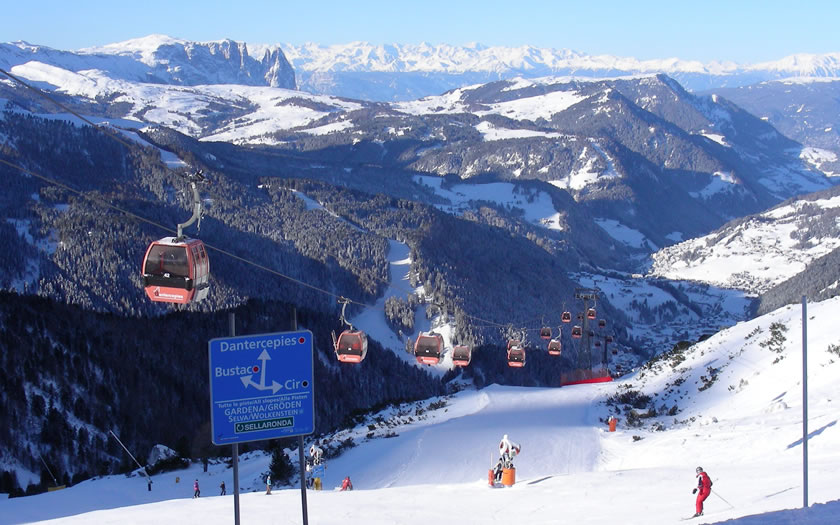 View of the Val Gardena skiing

The Val Gardena has around 10,000 inhabitants split amongst the main settlements along with the hamlets along the valley floor and higher up the mountainside. It is one of the majority Ladin-speaking areas of the Dolomites and there is a strong sense of community from the descendants of the original inhabitants of the valley.

Of course, with tourism the main summer and winter money-spinner, more outside businesses and people are moving into the area but it still retains a distinct identity.

The connections both on the slopes and on the roads are continually being improved, although both the routes over the passes at the end of the valley and the road itself along the valley floor are still relatively subject to adverse weather conditions, perhaps more so than comparable resorts in France and Austria.

This is part of the charm of the valley - that visitors can enjoy a skiing holiday with all the facilities but where traditional life and customs (such as the woodcarving) still exist and are more than words on the page of a tourist office brochure.